On August 19, ten days after police murdered Michael Brown in Ferguson, Missouri, a slew of corporate media stories appeared charging that “criminals” and “outside agitators” were responsible for clashes during the protests. CNN alleged that “all sides agree there are a select number of people—distinct from the majority of protesters—who are fomenting violence,” quoting a State Highway Patrol Captain, a State Senator, and a former FBI assistant director to confirm this.

Today’s militarized police understand that they are operating on two different battlefields at once: not only the battlefield of the streets, but also the battlefield of discourse. So long as most people remain passive, the police can harass, beat, arrest, and even kill people with impunity—certain people, anyway. But sometimes protests get “out of hand,” which is to say, they actually impact the authorities’ ability to keep the population under control. Then, without fail, police and politicians proceed to the second strategy in their playbook: they declare that they support the protesters and are there to defend their rights, but a few bad apples are spoiling the bunch. In this new narrative, the enemies of the protesters are not the police who are gassing and shooting people, but those who resist the police and their violence. When this strategy works, it enables the police to go back to harassing, beating, arresting, and killing people with impunity—certain people, anyway.

Sure enough, a few hours after these articles about “criminals” and “outside agitators” appeared, the St. Louis police killed another man less than three miles from Ferguson. Here we see how defining people as “criminals” and “outsiders” is itself an act of violence, setting the stage for further violence. You can predict police behavior at protests with a fair degree of accuracy based on the rhetoric they deploy in advance to prepare the terrain.

So when we hear them say “outside agitators,” we know the authorities are getting ready to spill blood. All the better, from their perspective, if people buy into this rhetoric and police themselves so no officer has to get his hands dirty. This is often called for in the name of avoiding violence, but self-policing returns us to the same passivity that enables police violence to occur in the first place. How many people would have even heard about Michael Brown if not for the “criminals” and “agitators” who brought his death to our attention? Self-policing also preserves the impression that we all choose this state of affairs of our own free will, reinforcing the impression that anyone who does not is an outsider.

“All sides agree there are a select number of people—distinct from the majority of protesters—who are fomenting violence.” –CNN 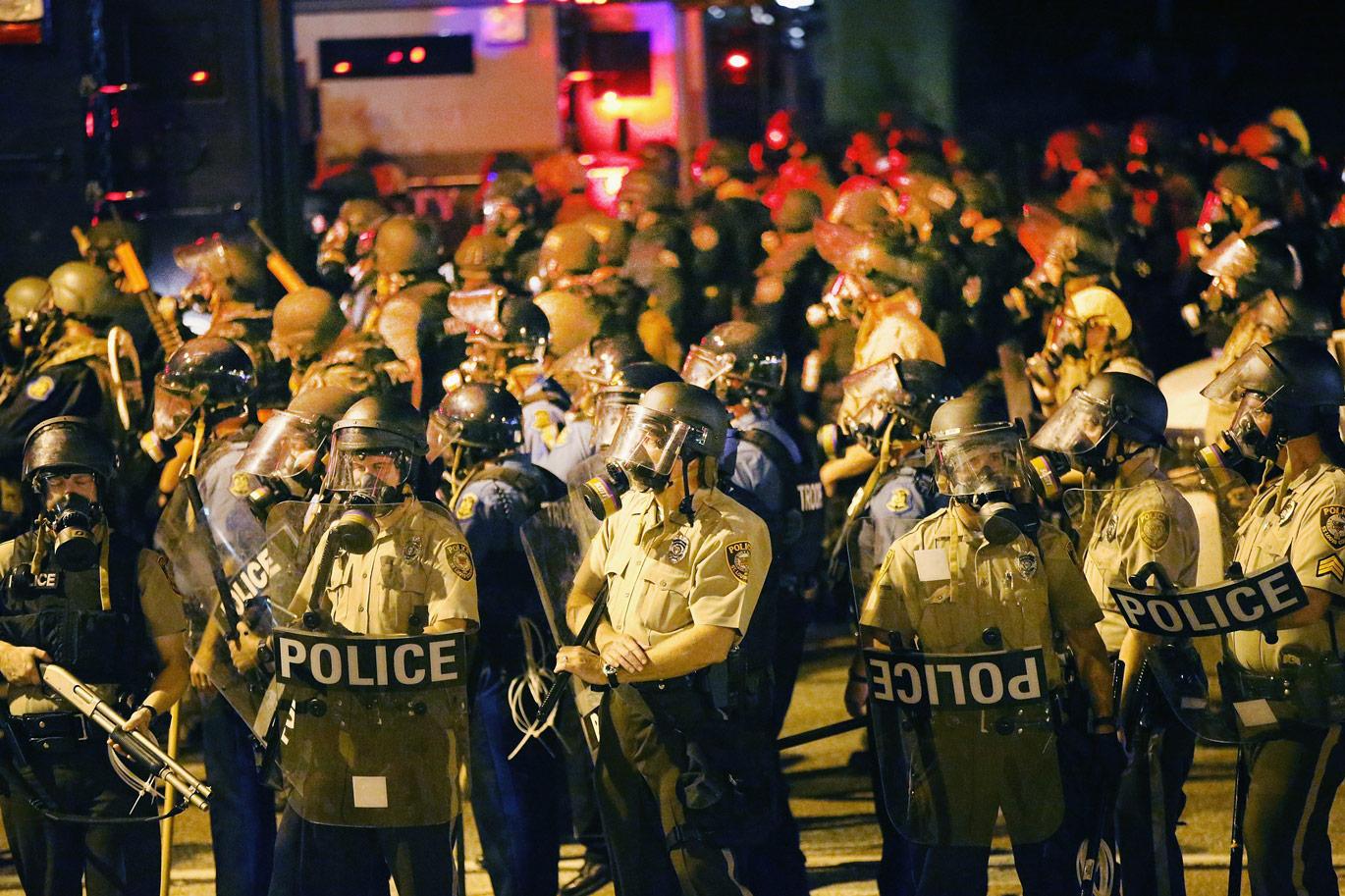 What is an “outside agitator,” anyway? Deploying the National Guard to a town of 21,000 people—isn’t that outside agitation? When Occupy Oakland was in the news in 2011, there was a lot of rhetoric about “outside agitators” coming to the city to start trouble with police, until it came to light that over 90% of Oakland cops lived outside of Oakland. Surely if anyone deserves to be labeled outside agitators—in Ferguson, Oakland, or any other community around the US—it is the authorities.

But what about people who come from out of town to participate in protests? The CNN article claimed that “among those arrested are residents of Chicago, Brooklyn, Washington, San Francisco, Austin, Des Moines, and Huntsville, Alabama, according to jail records.”

This might sound like convincing evidence to middle class readers. But anyone who has been poor and precarious knows that the permanent address you give when you are arrested may not be the same as the place you actually live. You might give a different address because you aren’t sure your current housing will last, because the landlord doesn’t know your place has more people in it than are named on the lease, or simply because you don’t want local vigilantes to know where to find you. Instead, you might give a more reliable long-term address, perhaps from another state.

Still, let’s imagine that some of these arrestees who gave out-of-town addresses are in Ferguson for the very first time. Wouldn’t that make them outside agitators? Perhaps it would, if the issue was specific to Ferguson alone and they had no stake in it. But in “Chicago, Brooklyn, Washington, San Francisco, Austin, Des Moines, and Huntsville, Alabama” the police have killed black men under identical circumstances. The militarization, brutality, and systematic racism of the police are in effect all around the country, not just in Ferguson. When people are suffering the same forms of oppression everywhere, it makes sense for us to come to each other’s assistance, to make common cause.

This is not outside agitation. It is solidarity.

So long as we understand the problems we face individualistically, we will be powerless against them. Solidarity has always been the most important tool of the oppressed. This is why the authorities go to such lengths to demonize anyone who has the courage to take risks to support others. Throughout the civil rights struggles of the 20th century, participants who are celebrated as heroes today were tarred as “outside agitators.” The term has a long history on the tongues of racists and reactionaries.

In this light, it is ironic, if not unexpected, that one of the corporate media stereotypes of the “outside agitator” is the “white anarchist”—as if all anarchists were white. It’s no longer considered decorous to call people race traitors, so the allegation is inverted: white people who fight alongside black and brown people must not have their best interests at heart, certainly not as much as the police and corporate media do. Although declaring oneself an anarchist does not magically free a white person of the racism that pervades our society, it is racist indeed to attribute all the unrest in Ferguson to “white anarchists,” denying the existence or agency of black and brown participants.

This is the corporate media attempting to play a race card of its own, in order to create divisions between those who struggle against police brutality. It’s not surprising that the authorities would seek to create discord along racial lines—one of the chief reasons race was invented was to divide those who would otherwise have a common interest in overturning hierarchy. 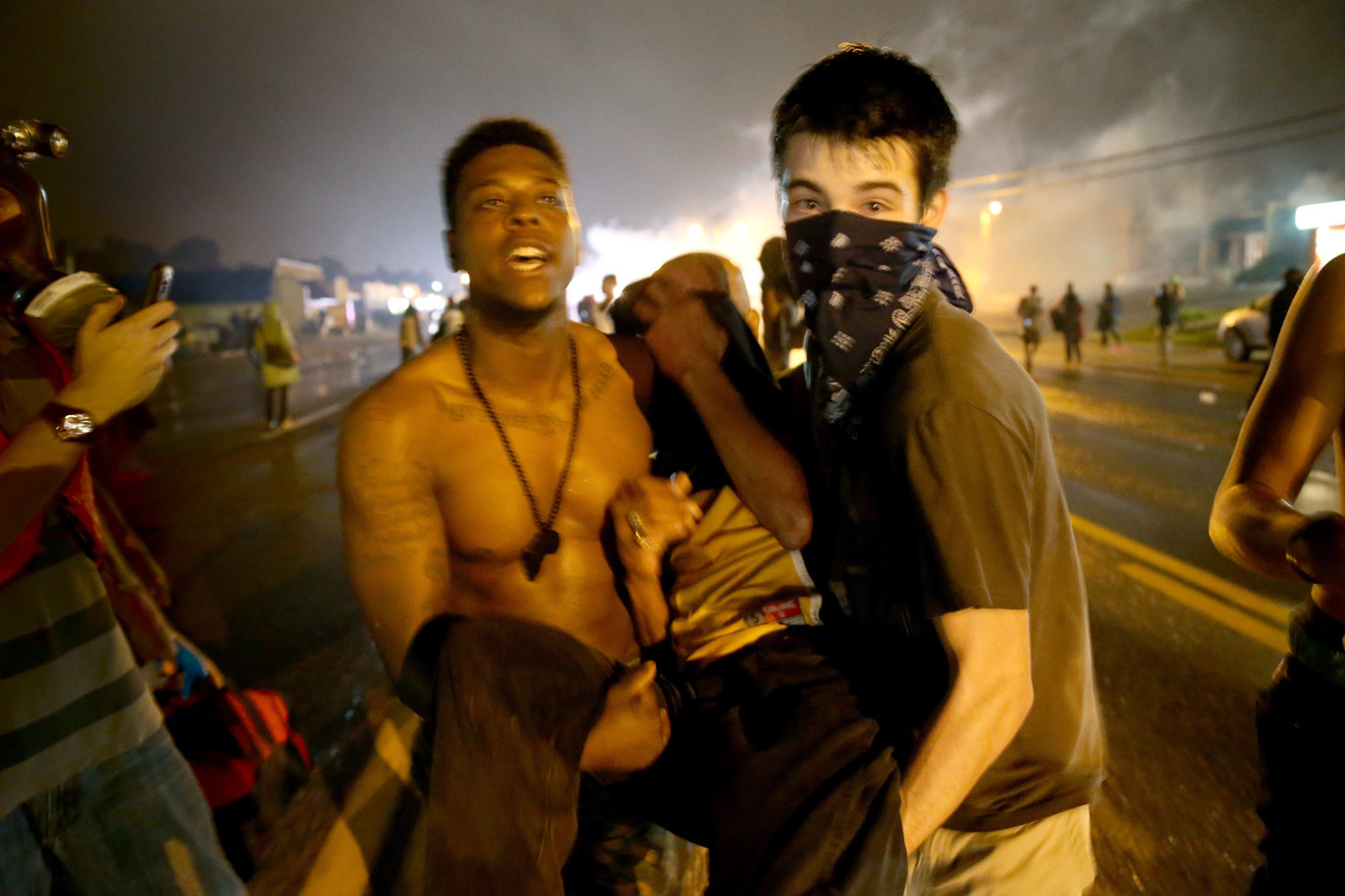 To emphasize this once more, we have to understand the deployment of rhetoric about “outside agitators” as a military operation intended to isolate and target an enemy: divide and conquer. The enemy that the authorities are aiming at is predominantly black and brown, but it is not just a specific social body; it is also an aspect of our humanity, a part of all of us. The ultimate goal of the police is not so much to brutalize and pacify specific individuals as it is to extract rebelliousness itself from the social fabric. They seek to externalize agitation, so anyone who stands up for herself will be seen as an outsider, as deviant and antisocial.

This would be more likely to succeed if most people were integrated into comfortable places in their power structure. But the problem with their strategy, at this particular historical juncture, is that more and more of us are finding ourselves outside: outside a steady workplace, outside a recognized position of political legitimacy, outside the incentives that reward people for keeping quiet. We are finding ourselves outside, and finding each other. We are finding that it doesn’t make sense to go on being docile, that our only hope is to stake everything on fighting together for our collective survival rather than contending amongst ourselves for a place in the hierarchy.

Next time, the authorities will be lucky if the disturbances are confined to a single town, so they can accuse those who go there of being outside agitators. The racism and police brutality for which Ferguson is now infamous are widespread. The next conflagration could spread everywhere, like Occupy did. Stop killing us, or else. 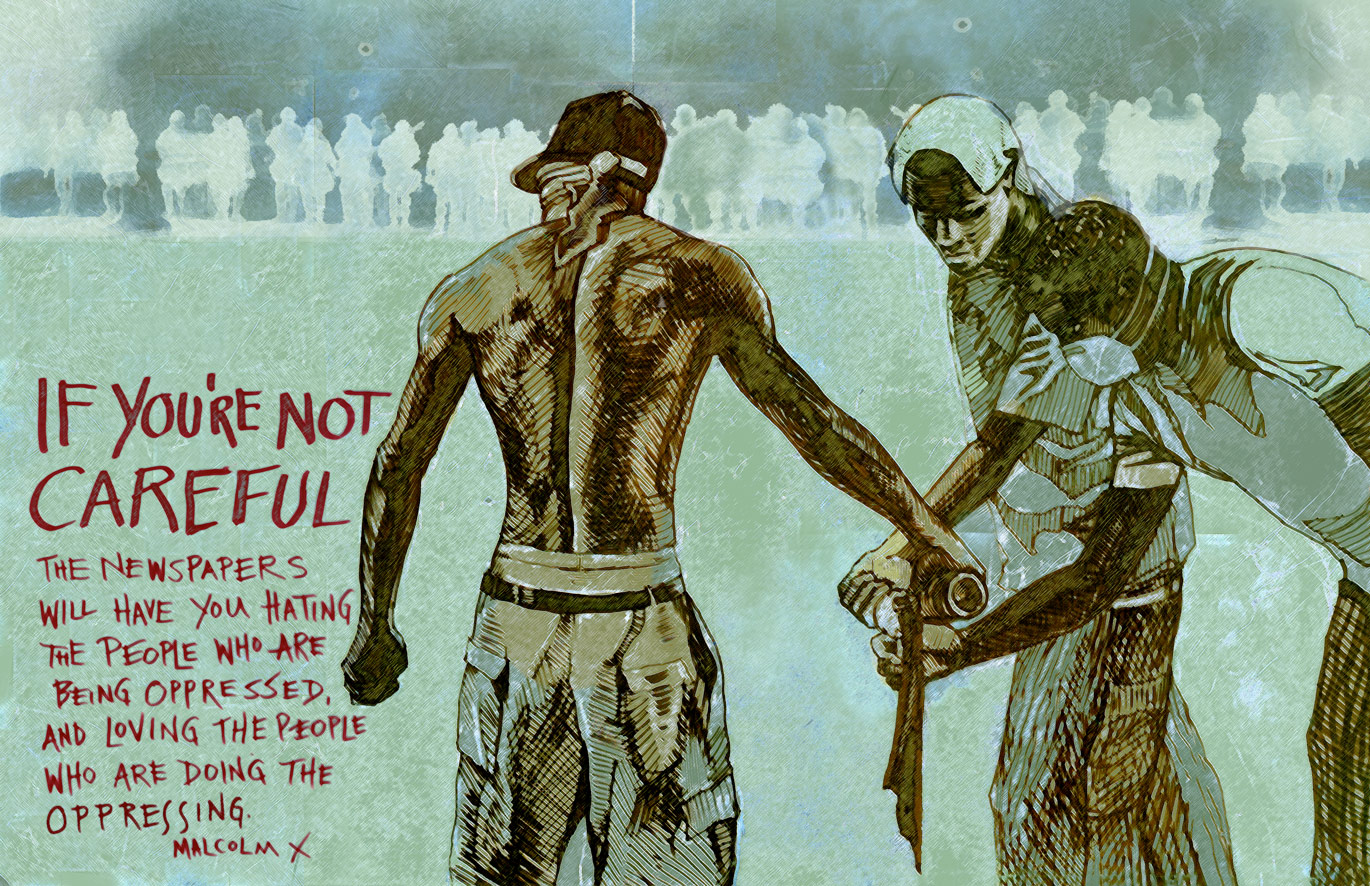 This illustration is available in poster form from artist Corina Dross, to raise funds for arrestees in Ferguson.

CrimethInc. is an anonymous network of anarchists and insurgents, a desperate measure against quantification and computation, a flaming hearse for the hierarchies of our age.